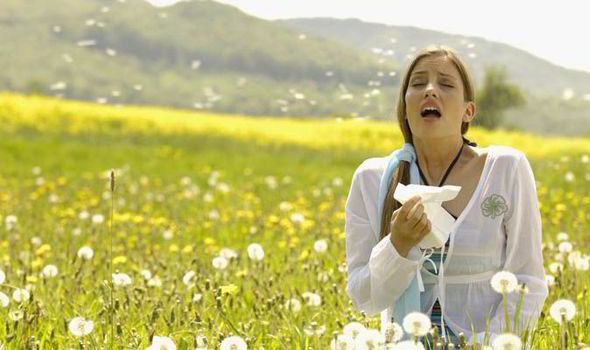 A recent client of mine had originally come to see me about an issue not related to her hay fever, but I could not help but notice that she was suffering from it in a severe way so I inquired about it and discovered that she had a daily morning routine of sneezing spasms, coughing, and wheezing sometimes even to the point of retching!

She had pretty much resigned herself to the fact that she was stuck with this problem for life and wasn’t even looking for a solution for it at the time.

This woman had been to more than one allergy specialist who had suggested some different medications that she could take, but as the drugs suggested were expensive and carried with them a number of unpleasant side effects, she had chosen to simply put up with the daily hacking.

I suggested to her, accordingly, that we also touch upon her hay fever problems in our upcoming hypnotherapy sessions.

She was initially surprised because the problem she had come to get treatment for was a mental issue which had nothing to do with her physical allergy.

This kind of reaction is typical because of the way the medical industry has divided human beings into clearly distinct departments, body, mind, and spirit being clearly demarcated.

Hypnotherapy, on the other hand, tends to view the human being in a more holistic way, and accordingly the positive results that one can gain from hypnotherapy also tend to be more on the holistic side of things.

When I explained this to her my client ended up agreeing to including her hay fever issue into our sessions, although not really expecting much to come out of it.

Admittedly, I myself didn’t even expect any immediate or dramatic results, but had only thought that it was worth a try to see if we could reduce her symptoms even just slightly.

To both our surprises, however, we saw very substantial reductions in her symptoms almost right away! After only a couple of sessions she reported a large reduction in her morning sneezing and coughing, and her uncontrollable spasms and retching disappeared entirely. At the same time she even cut back and then eventually stopped taking antihistamine tables altogether while still seeing these dramatic improvements.

This experience confirmed to me that pretty much anything is possible when it comes to hypnotherapy. No matter how much a problem seems to be completely physical (pollen or dust entering into the lungs, for the present case), hypnotherapy has been able to show just how integrated and non-independent the body and mind truly are.

I admit that it was not a complete stab in the dark to try hypnotherapy for hay fever, as I had been aware of some research on their connection undertaken at Basel University in Switzerland.

After a year the self-hypnosis volunteers reported reduced symptoms compared with the group who had been taking just the allergy medication alone. Although the differences in symptoms was not dramatic, researchers found that the hypnosis group was able to cut back on their medication while still developing a noticeably improved nasal air flow in comparison with the other group.

Although the precise connection between hypnotherapy and hay fever symptoms is not yet clear, it very clearly does seem to help some people.

And given the severity of the symptoms of serious hay fever cases, many people may find it worth their while to give hypnotherapy a try. If you have any further questions about hypnotherapy for hay fever or any other issue, please don’t hesitate to contact me for further information.